We fixed up an old black cab and drove it to Le Mans.

We got there but it finally died once it had got us back to the UK...

Yes, we know it’s dangerous to go through the woods to the side of the track - that’s why we took the man with the torch’s advice and came back…

The number 8 Audi is leading a Pescarolo by one lap with the Racing for Holland Dome third. Alan McNish in his second stint of a triple has pulled the second Audi up to fourth after it lost over 20 minutes when the fuel injection system was replaced. The MG still lead the LMP2 and Corvette lead the GT1. I’m not sure who’s leading GT2, probably one of the myriad Porches that are circulating.

Posted in Race Radio | Comments Off

It seems to be following the script so far, the two velvety quiet Audi’s have been out in front scrapping for the lead but there’s now a Pescarolo up in the mix with them after the pit stops. In GT1 Aston 007 has lost time to an oil leak. Following this race is like juggling on a unicycle whilst crossing a tight rope as you have to know who’s racing who and which lap they are on.

Posted in Race Radio | Comments Off

A peek into the Audi garages 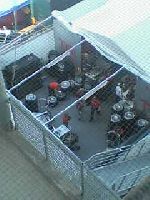 Grandstand view for the start.

Only ten minutes to the start.

To continue the Friday night tradition, we took the cab to the roundabout for a spot of automotive hooliganism, and got a free manual car wash from the nice gentlemen with the water pistols… We were stopped for another burnout on the roundabout, which we expected, but we were also hailed for a fair. He took exception when we informed him that the fare to Liverpool Street would be £800 and took a full blast in the face from a Super Soaker. The crowd were however appreciative of our efforts if the cheers were anything to go by. DYK’s doing us proud!

The germans know how to go camping!

These guys have satellite TV and beer on draft as well as their giant truck. 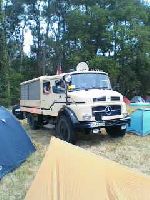 Burn out on the Mulsanne Straight

While returning from the supermarket along the straight, we were accosted by a large crowd. They stuck a pelican crossing beacon in front of the cab, and began the countdown… Revving the cab on the brakes, it moved forward and back on its suspension to much approval from the crowd. The beacon moved and I floored it! DYK sprang forward sputtering slightly from the demand on its tired engine, but it slowly gained speed and headed off down the straight to a massive roar of approval from the crowd. Result! I’ve just done a burnout (well sort of) on the Mulsanne Straight in a 14 year old black cab. 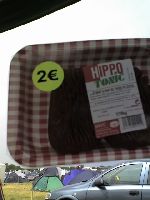 A bit of a slow puncture so maybe we will use that spare type before we get home. Off to hyper market for supplies of beer and duck-in-jar. 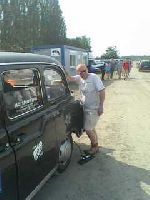