A vote of gratitude to Robin Saunders for supplying the funds for upgraded breakdown cover. Generously he has donated the sponsorship space to which he is entitled to a charity, The Dover Detainee Visitor Group, which is a voluntary and non political organisation committed to helping Immigration Act Detainees at the Dover Immigration and Removal centre. 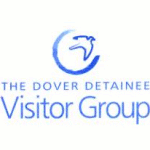 For those traveling to Le Mans via Dover the Immigration and Removal Centre is situated in the Victorian fort on the Western Heights which can be seen from the ferry on the opposite side of the port to the famous castle.